Nelson, New Zealand is located at the top of the South Island. The Nelson region has New Zealand's highest amount of sunshine each year, and a mild climate year round.

Nelson has many small cafes and restaurants that make superb use of the local fruit, vegetables, seafood and produce, combined with an appreciation for fine wine. The speciality of the area is seafood, with everything from fish and chips to delicious seafood chowder. Visit the Mapua café and smokehouse for some of the best and freshest smoked seafood you have ever tasted.

In the Nelson region there are a large number of artists and crafts people, with lots of small galleries, boutique shops and historic buildings. You could visit WOW - The World of Wearable Art and Collectable Cars, where a fine collection of New Zealand cars and memorabilia are combined with an exhibition of highly unusual wearable art that exhibits at the annual Montana World of Wearable Art awards. At Hoglund Art Glass you can watch glassblowers in action. Every week a visit to the colourful Saturday market to see the arts and crafts people in one place and pick up a bargain, is a must.

The scenic drive from Nelson to Golden Bay takes you past vineyards, where you can take a wine tour and learn about the area's Chardonnay, Sauvignon Blanc and Pinot Noir. Driving on you pass small beach towns, over the steep Takaka Hill, before plunging back down to Golden Bay. Travel out to Collingwood, where you can take a guided 4WD tour out to Farewell Spit, which is a wetlands and bird sanctuary of international importance. You can go to the lighthouse or walk on the spit.

Nelson Lakes National Park is at the northern end of the Southern Alps with many lakes, steep mountain ranges and beech forests. You could walk around Lake Rotoiti, or take an alpine track up to the high alpine tarn of Lake Angelus. The region is as it was 500 years ago. There are some great fishing spots in Nelson Lakes National Park including Lake Rotoiti and Lake Rotorua. The fishing is unrestricted October to April each year. The lower reaches of some rivers can be fished year round. Nelson Day Tours
Nelson in the top of New Zealand's South Island, is a region blessed with a mild climate and long sunny days. You can take a Nelson Wine Tour, and visit some of the best wineries in the region. If you are looking for an ...
View all tours 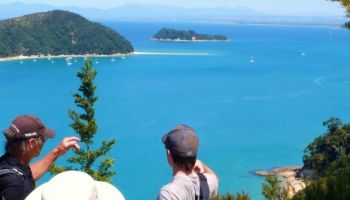 Abel Tasman Walking Breaks
Abel Tasman National Park is located at the top of the South Island of New Zealand. The Abel Tasman Coast Track has been named as one of New Zealand's "Great Walks", and extends for 54 km from Marahau to Golden Bay. ...
View all tours Abel Tasman Kayaking Breaks
Sea kayaking in the Abel Tasman National Park combines kayaking the protected coastline of this pristine National Park; with walking the lush northern Abel Tasman Coast Track. You can add in an extra day at each of our B...
View all tours 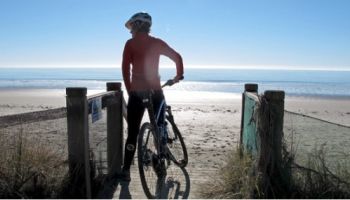 Nelson Bike Tours
Nelson has some great Bike Trails in the region associated with the New Zealand Bike Trails network, and the wine growing region in the surrounding countryside. There are cycling options to Abel Tasman National Park and ...
View all tours