Around 15,000 years ago the last ice age was spreading its cooling touch over the world as we know it. In this neck of the woods massive glaciers ruled the South Island. They carved out steep sided valleys and in their retreat left behind a legacy of mountain lakes and moraine walls.

Today recreational users are  discovering all the secrets that the Nelson Lakes region has to offer. The Majestic Mountains and wide valleys are ideal for beginner hikers or advanced Mountain climbers.
Maori legend tells us that there was a powerful chief, magician, and sorcerer named Rakaihaitu. Long long ago, before the great migration of the canoes, he came to New Zealand in his canoe Uruao, and journeyed around the coast. But when he landed near Nelson, Rakaihaitu decided to find a way overland through the rugged heart of the South Island.

He and his followers set off across the plains and reached the beautiful wild country of the Buller region and the start of the mighty chain of mountains in the Nelson Lakes area. The chief took his great Ko, his digging stick and began to dig enormous holes in the ground. He worked long and hard, and eventually the holes filled with water, and became the known as Lake Rotoiti and Lake Rotoroa (The Nelson Lakes). Rakaihaitu then continued his journey South digging and naming all the great lakes of the South Island. Eventually he reached Foveaux Strait and settled there, and the tribes in that area trace their ancestry back to him.....

Despite their beginnings in Maori mythology as being the first South Island lakes, The Nelson Lakes, both Rotoiti and Rotoroa do not seem to have ever been settled by the Maori people. However the lakes and rivers of the area, rich with eels and mussels were popular fishing grounds and stop over points for parties travelling en route from Tasman Bay to Canterbury or the West Coast.

The tribe of Ngatitumatakokiri was the dominant power of the area for a long time, with a rich resource of knowledge and an intimate understanding of the trails, rivers and lakes of the Nelson Lakes area. But this was all but destroyed over a number of years as first pressure from the West Coast tribes and then by warring tribes from the North Island who put the newly acquired musket to deadly effect.

The Europeans in general when they first arrived viewed the Nelson Lakes as everything they did not want in a new country. They were looking for warm open pastoral lands, and instead found mountainous country covered with thick forests. The Nelson Lakes also marked the start of a mighty chain of mountains which rain southward unbroken for 500 kms; the Southern Alps.

However this didn't stop the enterprising settlers, and in 1848 a gentleman by the name of George McRae took up the 3500 acre block known as the lake run, situated by Lake Rotoiti.

Over the years there have been some farming enterprises around the area, but as a whole the mountains and valleys have remained virtually untouched, with visitors staying at the small, picturesque town of St Arnaud. Today the Nelson Lakes National Park, New Zealand is crisscrossed with un-crowded tracks, which take you into areas of vast beauty in a relatively short space of time.

In 2004 several pairs of the Great Spotted Kiwi were relocated from the Heaphy Track area and placed beside Lake Rotoiti in the Nelson Lakes region. This area is known as the Rotoiti Nature Recovery Project and compromises approximately 500 ha of native Beech forest.

What makes this Mainland Island so unique is that its entire boundary is unfenced. Through intensive trapping, pest and rodent control the Department of Conservation has managed to create a relatively secure stronghold for many rare or endangered bird species.

Thanks to the efforts of the Department of Conservation,  the Kaka, the Great Spotted Kiwi, and many other birds now have an increased chance of survival in this special area. The success of the project's work is evident when walking through the beech forest. There is a resounding chorus of Korimako or New Zealand Bellbirds, Mistletoe is becoming more visible and small groups of Kaka can be spotted 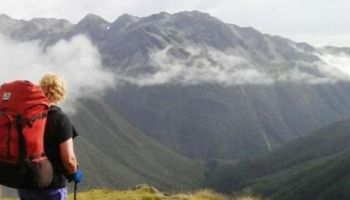