The "Otago Central Rail Trail" is one of New Zealand's great recreational trails used by bikers, walkers and horse riders. It follows part of the route of the old railway line from Clyde to Middlemarch, which originally linked Dunedin with Cromwell. The link from Middlemarch to Clyde took 16 years to complete this 150 km section, crossing numerous bridges, viaducts and culverts through some most spectacular scenery, including the Maniototo Plain, farmland, hills and gorges.

The rail road was originally built to service the booming gold mining industry that developed after the discovery of gold in 1861, linking the gold mines with the city of Dunedin. As the gold boom subsided, the railway line eventually closed.

In February 2000 the Central Otago Rail Trail was re-opened as the first rail trail in New Zealand. Before being opened all the sleepers, rock ballast and railway lines were removed, and the track was replaced by a gravel surface.

The Otago Central Rail Trail was the fore-runner to the later development of Nga Haerenga, the New Zealand Cycle Trail, which now runs in both North and South Islands of New Zealand.

The prevailing winds in Otago are Northwesterly. By cycling from the Clyde end of the Otago Rail Trail, you do receive some protection from the nearby hills. The track goes slightly downhill between Clyde and Alexandra, with the Northwesterly behind you, before climbing to Wedderburn, the halfway point on the ride to Middlemarch. From Wedderburn the trail again slowly descends to Middlemarch. However weather in New Zealand is very variable, so the wind direction does frequently change, making prediction extremely difficult! 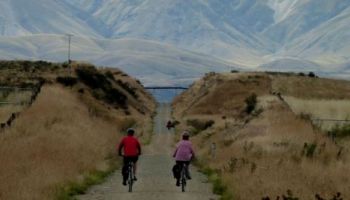 4 Day Supported Otago Rail Trail Bike Tour
South Island
NZ$1,295.00
This particular tour is one of our most popular packages. Enjoy the health benefits of an outdoor bicycle tour followed by relaxing activities in the...
Explore